Nagqu lies in the northern part of the Tibet Autonomous Region at longitude 84o55 'E and latitude 29o55 '-36o30 'N. It neighbors qamdo in the east, Ngari in the west, Lhasa, Nyingchi and Xigaze in the south, and the Xinjiang Uygur Autonomous Region and Qinghai Province in the north. It is embraced by the Tanggula, Nyainqentanglha and kangdese Mountains, and the snow-capped Dargo Mountain in the west and the Burgyi Mountain in the east, guarding the treasure land like two ferocious lions.

Covering an area of some 400,000 square kilometers, Nagqu is generally referred to as Changtang; the area is high in the west and lies at an elevation of over 4,500 meters and low in the east. The vast region of the central west is basically flat but dotted with hills and numerous lakes, and is crisscrossed by rivers. There are high mountains surrounding the river valleys in the east, which is the farming region of northern Tibet. This area lies at an elevation of from 3,500 to 4,500 meters and also has forest resources and bush pasture, and a climate that is more equitable than that in the central west.

Nagqu falls within the sub-frigid zone and experiences extreme cold, a scarcity of oxygen, dry air and storms. There are no absolutely frost-free periods. Nagqu has an annual average temperature of -0.9oC to -3.3oC, an annual relative humidity of 48-51 percent, an annual precipitation of 380mm, and he sun shines for 2,852.6-2,881.7 hours each year. From November to March the air is dry, the temperature low and the area is exposed to violent sandstorm. From May to September, Nagqu is warm and enjoys good weather. The annual growing season lasts for 100 days, and during this period the area receives 80 percent of its annual precipitation. At this time the grasslands are emerald and grazed by flocks of sheep.

Getting around Tibet can be difficult : Buses are often gasping their last while traveling 4WD can be expensive. Road safety is littlie more than a slogan. Tibetans tend to rely on prayer to facilitate a safe arrival. And, Bicycling is impossible, but is not without its hazards: Cyclist in Tibet have died from road accidents, hypothermia and pulmonary oedema

Nagchu (Naqu,Nakchu) has a horse-racing festival from 10 to 16 August, when the town swells with up to 10,000 nomads and their tents from all over the Changtang (northern plateau). Accommodation can be very tight at this time 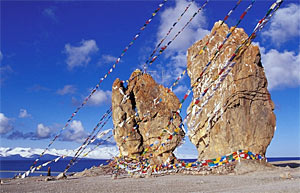 Nam cLake Nam Coo is the highest lake in the world and is 4,718 meters above sea level. It is 72 kms long from east to west and is 30 km wide from south to north. It has an area of 1940 sq km. some 60 kms to the northwest of Damxung country seat, it is one of the three holy lake in Tibet and receives high respects among the local people. Legend has it thatNam Lake is the beautiful daughter of nearby Bam Lake. she was married to the Nyainqentanglha Mountains. As time passes, she could not stand the frigid weather and loneliness any longer and so, with a sad heart, threw all her jewels, ornaments in to the lake. Dzashi monastery on Dzashi Penisula in Nam Lake is a sacred place to Buddhists. thousand of pilgrims travel a long way to worship here on the Tibetan New Year.

The vast Chongqenkuadu Pasture to the north of Naqu Town is the site of the annual Nagchu Horse Racing Meet held in the 7th or 8th month of the Tibetan calendar. During the one week horse racing festival, other kinds of sports activities will be held too such as tug of war, carrying rocks, shooting and yak racing. During the Horse Racing Meet, there are mini buses to the meet site from Nagchu for two Yuan each. Tourists can go back to stay at Nagchu for the night.

Qiangtang, the meaning of "northern highland", refers to the north Tibetan plateau. Located in among Kunlung mountains, Tanggula mountains and Ganddis mountains, its land area covers 2/3 of the whole Tibet. Its situated 4000 meters above sea level. The north of Qiangtang Plateau is even called No People area, but this place is ideal living area of rare animals, including the north of Gangdisi Mountains and Nyainqen-tanggula Mountains and the wide area south of Kunlun mountains. It is main base for the animal husbandry, having a large number of posture land and grass of high quality. the famous "plateau boat" Yak and Tibetan antelope just live in this area. The herdsmen's homes "dong wozi" are mostly located by foot mountains and the sides of lakes. The herdsmen shake away the long loneliness by hardworking and singing in the harsh nature, creating their beautiful and colorful life.

92 kms to the south of Nagchu Town, the Zhoima Canyon Scenic spot has an average elevation of 4,700 meters. It has good transport facilities and a nice natural environment with beautiful mountains and lakes. In June & July, the climate of this place is very comfortable. The place is full of flowers and grass which looks very attractive.