Lhasa lies in the Tibet autonomous region. Autonomous region is situated in the south central part of the region. On the north bank of the Kyichu river, in a mountain-fringed valley. At an elevation of 3,658 m, the city also known as Sunlight City, is the highest city in the world. The mineral resources are very abundant. The city is enriched with copper, iron, Au, granite, marble, and plaster etc. The city has many Buddhist monuments and was the seat of the Dalai Lama, so that flocks of pilgrims have been making their pilgrimage to the city for centuries. Lhasa is the heart and soul of Tibet, abode of the Dalai Lamas and an object of devout pilgrimage. It is really a city of wonders.

Lhasa is also very important for agricultural, animal husbandry and for its agricultural machine,power,leather,food and motor-car reparation and concrete. Lhasa is also famous for handicrafts. Lhasa is the cultural historical cit in china. Lhasa is full of ancient temples. There is the biggest lake in the world, that is Namucuo Lake. The traditional specialties are carpet, Jewellery, highland barley wine, snow-lotus and Zang flowers

In Tibetan Lhasa means "The land of the Gods". Lhasa enjoys delightful weather, throughout all the seasons. Influenced by Indian monsoon, Lhasa has a mild climate throughout the year. The yearly highest temperature is 29 degrees Celsius; the lowest minus 16.5 while the yearly average temperature is 7.4. Most of the yearly rainfall hits in July, August and September.

Getting around Tibet can be difficult : Buses are often gasping their last while traveling 4WD can be expensive. Road safety is littlie more than a slogan. Tibetans tend to rely on prayer to facilitate a safe arrival. And, Bicycling is impossible, but is not without its hazards: Cyclist in Tibet have died from road accidents, hypothermia and pulmonary oedema

Flourishing disco bars and Karaoke bars are becoming the most popular entertainment in Lhasa. There is one cinema on Yuthok Lu, however, its popularity has been declining. Another alternative is a visit to a Langma opera. Here Tibetan dances and songs from Kham and Amdo and occasionally Indian dances, are performed. There are dozens of them in town now; you just have to ask the locals to find out more information. A good choice now is to visit a Kailash, Makye Ame, Tashi or some other restaurant to enjoy pop music and share travel stories. If Nightclubs is what you are after, although a relatively new concept, one can be easily found near Snow lands Hotel.

Small restaurants to satisfy travelers from every corner of the world are booming all over Lhasa. Most of them cluster around the Jokhang Temple and Barkhor. Travelers can easily find places to eat and drink. more information

Lhasa, as the capital city of Tibet, offers better facilities e.g. accommodation, restaurants and shopping, than the rest of the region, so we suggest, if you are planning to travel to other parts of Tibet, that you start your trip from here. Lhasa is also the best place to acclimatize before you go into the depths of Tibet and beyond. Bare in mind, to allow for acclimatization, refrain from particularly strenuous activities at the beginning of your trip.

one of the most famous architectural works, is erected on top of the Red Hill in Lhasa. The word "Potala" 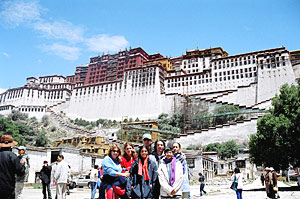 comes from Sanskrit. In 7th century, after the Tibetan King Songtsen Gampo's marriage with Princes Wencheng of the Tang Court, the Palace was built for meditation. In the mid -17th century, it was rebuilt by the 5th Dalai Lama to its present size, and ever since it became the Winter Palace of the Dalai Lamas. The construction took fifty years from its beginning to completion. The Potala is divided into two sections, namely, the Red Palace and White Palace. The total height of the Potala is 117m which is built in thirteen storeys, the length of the Potala from east to west has 400m and the breadth from south to north has 350m. The whole building is a structure of stone and timber. The top most flat glistens with golden roofs. It is a majestic architectural work and the cream of Tibetan culture and complex of Tibetan and Han culture. 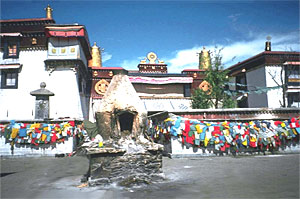 Temple , situated in the center of old Lhasa, was originally built in 647 AD. It was built by craftsmen from Tibet, China and Nepal thus features different architectural styles. The Jokhang is the spiritual center of Tibet and the holiest destination for all Tibetan Buddhist pilgrims. In the central hall is the Jokhang's oldest and most precious object - a sitting statue of Sakyamuni. This was carried to Tibet by Princess Wen Cheng from her home in Changan in 700 AD. The three-leaves roof of the Jokhang offers splendid views of the Barkhor Street, the bustling Barkhor market, across to the Potala Palace.